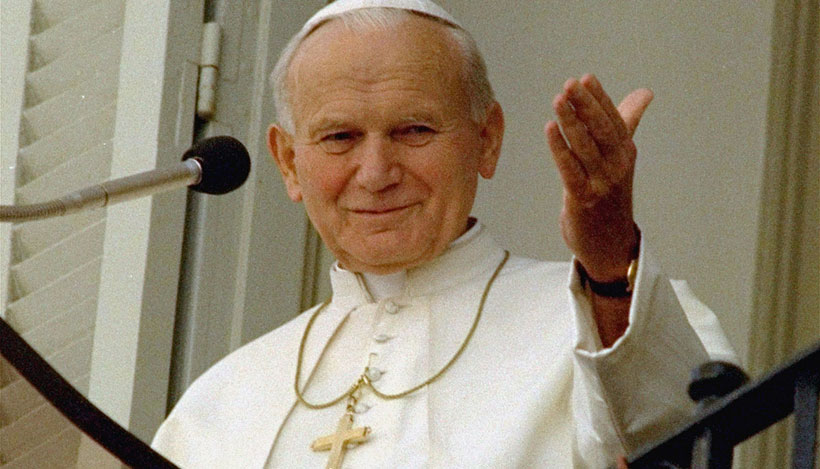 When God sent the world John Paul II, He really visited his people…

On the centenary of the birth of Pope Saint John Paul II, Pope Francis underscored this to faithful during his Mass, streamed from the tomb of Pope St. John Paul II from inside St. Peter’s Basilica, today, May 18, 2020, reported Vatican News.

This will be the last morning Mass streamed by the Pope during this coronavirus emergency, as he encourages, safely and prudently, returning to public Masses.

Reciting the Collect, Pope Francis prayed: “God, rich in mercy,” who called “Saint John Paul II” to lead the entire Church, grant us, “strengthened by his teaching, to open our hearts with confidence to the salvific grace of Christ, sole Redeemer of man.”

In sending Karol Wojtyla to lead the Church, Francis said in his homily, God truly visited His people. Francis remembered that today’s Responsorial Psalm (Psalm 149), says the “Lord loves His people,” and the people of Israel “when the Lord, given this love, sent a prophet, a man of God.”

Francis pointed out three traits of a good Pastor that were in Saint John Paul II: “prayer, closeness to the people, and love of justice.”

“Saint John Paul II was a man of God,” the Pope observed, “because he prayed and he prayed a lot,” notwithstanding the amount of work he had to guide the Church.

“He knew well that the first task of a Bishop is to pray,” the Argentinian Pope said, stressing: “he knew it and he did it — Model of Bishop that prays, the first task.”

Pope Francis said that he taught us that when a Bishop makes an examination of conscience in the evening, he must ask himself: “how many hours did I pray today? A man of prayer.”

The second trait, Francis said, was his being a man of closeness.

“He wasn’t a man detached from the people; on the contrary,” he said, “he went to meet the people and went around the entire world, finding his people, seeking his people, making himself close. And closeness is one of God’s traits with His people.”

A Pastor, the Holy Father said, is close to the people.

“Otherwise,” Francis warned, “he isn’t a Pastor, he is a hierarch, he is an administrator, perhaps a good one, but he isn’t a Pastor – closeness to the people. And Saint John Paul II gave us the example of this closeness: close to the great and to the little, to the near and to the far, always close; he made himself close.”

“Therefore,” he continued, “Saint John Paul II was a man of mercy, because justice and mercy go together, they can’t be distinguished; they are together: justice is justice, mercy is mercy, but one is not found without the other.

“Speaking of the man of justice and mercy,” Francis said, “we think how much Saint John Paul II did so that people would understand God’s mercy. We think of how he carried forward devotion to Saint Faustina whose Liturgical Memorial is now extended to the whole Church.”

“He felt,” the Holy Father said, “that God’s justice had this face of mercy, this attitude of mercy. And this is a gift that he left us: justice-mercy and mercy-justice.”

Pope Francis concluded his homily, praying: “Let us pray today that He may give all of us, especially the Pastors of the Church but to all, the grace of prayer, the grace of closeness, and the grace of justice-mercy, mercy-justice.”

Pope Francis, at the end of the Mass, prayed to God to enkindle in us “the flame of charity that nourished incessantly the life of Saint John Paul II,” and “drove him to consume himself” for the Church.

Among the songs heard during the Mass was one of the most noted of the World Youth Days (WYD), “Jesus Christ You Are My Life,” performed during the eve of the WYD of Tor Vergata, Rome, in 2000.

The Masses normally held in Francis’ chapel usually welcomed a small group of faithful, but due to recent measures’ taken by the Vatican, are now being kept private, without their participation. The Holy Week and Easter celebrations in the Vatican were also done without the presence of faithful, but were able to be watched via streaming.

The Masses at Santa Marta will stop being streamed after today, May 18th.

It was announced at the start of the lockdowns in Italy that the Pope would have these Masses, in this period, be available to all the world’s faithful, via streaming on Vatican Media, on weekdays, at 7 am Rome time, along with his weekly Angelus and General Audiences.

On May 4th, the country entered its so-called ‘Phase 2’, where it will slowly relaxing some of the lockdown restrictions.

Public Masses in Italy with the faithful resumed today in the country, with various safety measures in place, in order to protect the faithful.

In Italy where more than 30,000 people have died from COVID19, public Masses are still prohibited. To date, in the Vatican, there have been twelve cases of coronavirus in the Vatican, confirmed a recent statement from the Director of the Holy See Press Office, Matteo Bruni.

The Vatican Museums have been closed, along with the Vatican’s other similar museums. There have also been various guidelines implemented throughout the Vatican, to prevent the spread of the virus.

For anyone interested, the Pope’s Masses at Santa Marta can be watched live and can be watched afterward on Vatican YouTube. Below is a link to today’s Mass.